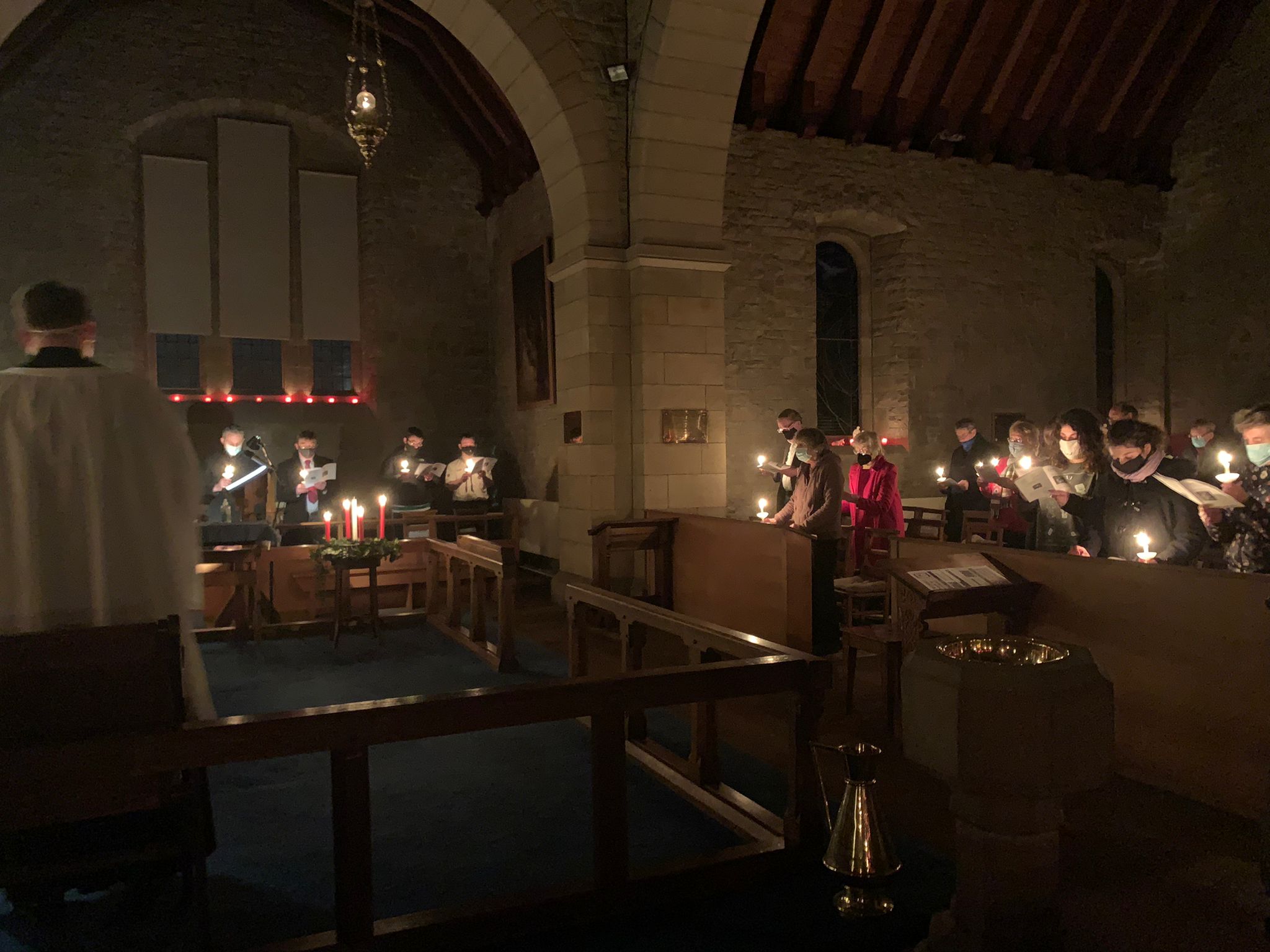 Find out what happens when you come to a service at Holy Cross and learn about the Eucharist, the heart of our worship and our main service.

There are two entrances to Holy Cross. Most people enter via the door nearest the roundabout. However, the door nearest our car park has easier access, with a ramp for wheelchairs and buggies. On arrival you will usually be welcomed and given the service sheets you need. At smaller services, the sheets are left in a prominent place by each door. You can sit wherever you want, no one has their own seat.

For the Eucharist a laminated card has the words that stay the same. There is a hymn book at each seat and you will be given a leaflet with the special words and music for each service. Don’t worry about when to stand, sit or kneel; feel free to follow your neighbours or just do what feels most comfortable.

All the baptised are invited to receive Holy Communion, just follow your neighbours to the altar rails. You don’t have to come up for communion. At present we are receiving Holy Communion only in the form of bread which is given into the hands.

It is worth making the effort to come to church because we find our true identity when we worship God together. We use the liturgies of the Scottish Episcopal Church and have a variety of styles of liturgy to suit all ages and stages on the Christian journey. There is always something to raise your heart to God!

To find out more about worship for children, check out the calendar and the Children and Families page. Below are some of the other opportunities for worship at Holy Cross. You can also find out about the Christian year.

In the sacred liturgy we encounter the Mystery at the heart of the universe and this is most true in the Eucharist. The Eucharist, also called Holy Communion or the Mass, is our main act of worship and you can find out more about it further down this page.

A quiet contemplative service using the traditional 1970 Scottish Liturgy, lasting about half an hour. There is no singing.

A community service using the 1982 Scottish Liturgy with music and singing. It lasts about an hour and is followed by coffee in the hall.

Children and families are especially welcome – in the church there is a buggy park and a space with books and toys for younger children and their adults.

A simple contemplative service using the 1982 Scottish Liturgy, lasting about half an hour. It is usually followed by coffee in the church.

2 pm First Friday of the month

A quiet celebration of the 1982 Scottish Liturgy with prayers for healing and the sacrament of anointing. These are optional and involve laying hands on your head and dabbing a small amount of the oil of the sick on your forehead. You can find out more about this on the Healing page.

Celebrated on Zoom, it lasts about half an hour and there is space for free prayer. For the link to join us, contact the Rector.

Church for under 5s and their grown-ups. Songs, stories, movement, play (& hot drinks for the grown-ups).

The Eucharist is the heart of our worship at Holy Cross and the source and summit of the Christian life.

The night before he died, Jesus gathered his twelve Apostles in a room in Jerusalem. He took bread and wine, told them these were his body and blood and gave them the command to ‘do this in memory of me’. By this he offered the sacrifice he was to accomplish on the cross the following day. Ever since then Christians, led by priests ordained by the successors of the Apostles, have obeyed this command.

‘Was ever another command so obeyed? For century after century, spreading slowly to every continent and country and among every race on earth, this action has been done, in every conceivable human circumstance, for every conceivable human need from infancy and before it to extreme old age and after it, from the pinnacle of earthly greatness to the refuge of fugitives in the caves and dens of the earth. Men have found no better thing than this to do for kings at their crowning and for criminals going to the scaffold; for armies in triumph or for a bride and bridegroom in a little country church; for the proclamation of a dogma or for a good crop of wheat; for the wisdom of the Parliament of a mighty nation or for a sick old woman afraid to die; for a schoolboy sitting an examination or for Columbus setting out to discover America; for the famine of whole provinces or for the soul of a dead lover…; while the lions roared in the nearby amphitheatre; on the beach at Dunkirk; while the hiss of scythes in the thick June grass came faintly through the windows of the church; tremulously, by an old monk on the fiftieth anniversary of his vows; furtively, by an exiled bishop who had hewn timber all day in a prison camp near Murmansk; gorgeously, for the canonisation of Saint Joan of Arc – one could fill many pages with the reasons why men have done this, and not tell a hundredth part of them. And best of all, week by week and month by month, on a hundred thousand successive Sundays, faithfully, unfailingly, across all the parishes of Christendom, the pastors have done this just to make the plebs sancta Dei – the holy common people of God.’

Whenever we come to the Eucharist we are part of this story.

What is the Eucharist and why is it so important for Christians?

The Eucharist is a sacrifice and enables us to share in his offering of himself on the cross. We offer to God the Father the gifts of his creation, bread and wine. By the power of the Holy Spirit they become the body and blood of Christ which we eat and drink. In the Eucharist Jesus offers the sacrifice of his body and blood on the cross to his Father and we share in this offering. ‘As often as you eat this bread and drink the cup, you proclaim the Lord’s death until he comes’ (1 Corinthians 11.26). This sacrifice was done once for all on the cross 2000 years ago, but Jesus our High Priest continues to offer it beyond time in the heavenly Sanctuary. The Eucharist re-presents in time and space this eternal sacrifice, by Jesus’ command, as a source of life for us (Luke 22.14-20; Hebrews 7.23-27; 9.11-14; Revelation 5.5-10). The Eucharist is thus called ‘the Holy Sacrifice’.

The Eucharist is the real and living presence of Christ among his people. Jesus said of the eucharistic bread and wine, ‘this is my body… this is my blood’ (Matthew 26.26-28) and ‘my flesh is true food and my blood is true drink’ (John 6.55). Jesus said to his disciples, ‘I am with you always, to the end of the age’ (Matthew 28.20) and one of the ways he is present is in the consecrated bread and wine of the Eucharist. At Holy Cross the Blessed Sacrament is reserved continually in the aumbry, the golden cupboard in the east wall of the church, for the communion of the sick and as a focus for prayer and adoration. The Eucharist is thus called ‘the Sacred Mysteries’ and ‘the Blessed Sacrament’.

The Eucharist feeds us and strengthens us for service. It enables us to go out into the world and serve God and our neighbour. Jesus said, ‘I am the bread of life, whoever comes to me will never be hungry, and whoever believes in me will never be thirsty’ (John 6.35). As we all kneel together at the altar rails, this sacrament reminds us that we are all equal and equally loved by God and are called to go out and love each other (John 13.34-35). The Eucharist is called ‘the Mass’ from the Latin ‘missio’ meaning a sending out.

The Eucharist gives us a taste of heaven. At every Eucharist we join ‘with angels and archangels and the whole company of heaven’ (Scottish Liturgy 1982) around God’s throne and altar in heaven and the Lamb that was slain (Hebrews 9.11-14, Revelation 5.5-10). The Eucharist is called ‘the Lord’s Supper’ because it was instituted at the Last Supper and anticipates the wedding feast of the Lamb in the heavenly Jerusalem (1 Corinthians 11.20; Revelation19.9). It is called ‘the Eucharist’, from the Greek word for thanksgiving, because in it we are taken up into this great cosmic act of thanksgiving to God.

O sacred banquet, in which Christ is received, the memory of his passion is renewed, the mind is filled with grace, and a pledge of future glory is given to us.

O God, who in this wonderful Sacrament have left us a memorial of your passion, grant us, we pray, so to venerate the sacred mysteries of your body and blood that we may ever experience in ourselves the fruits of your redemption. Who live and reign for ever and ever. Amen.