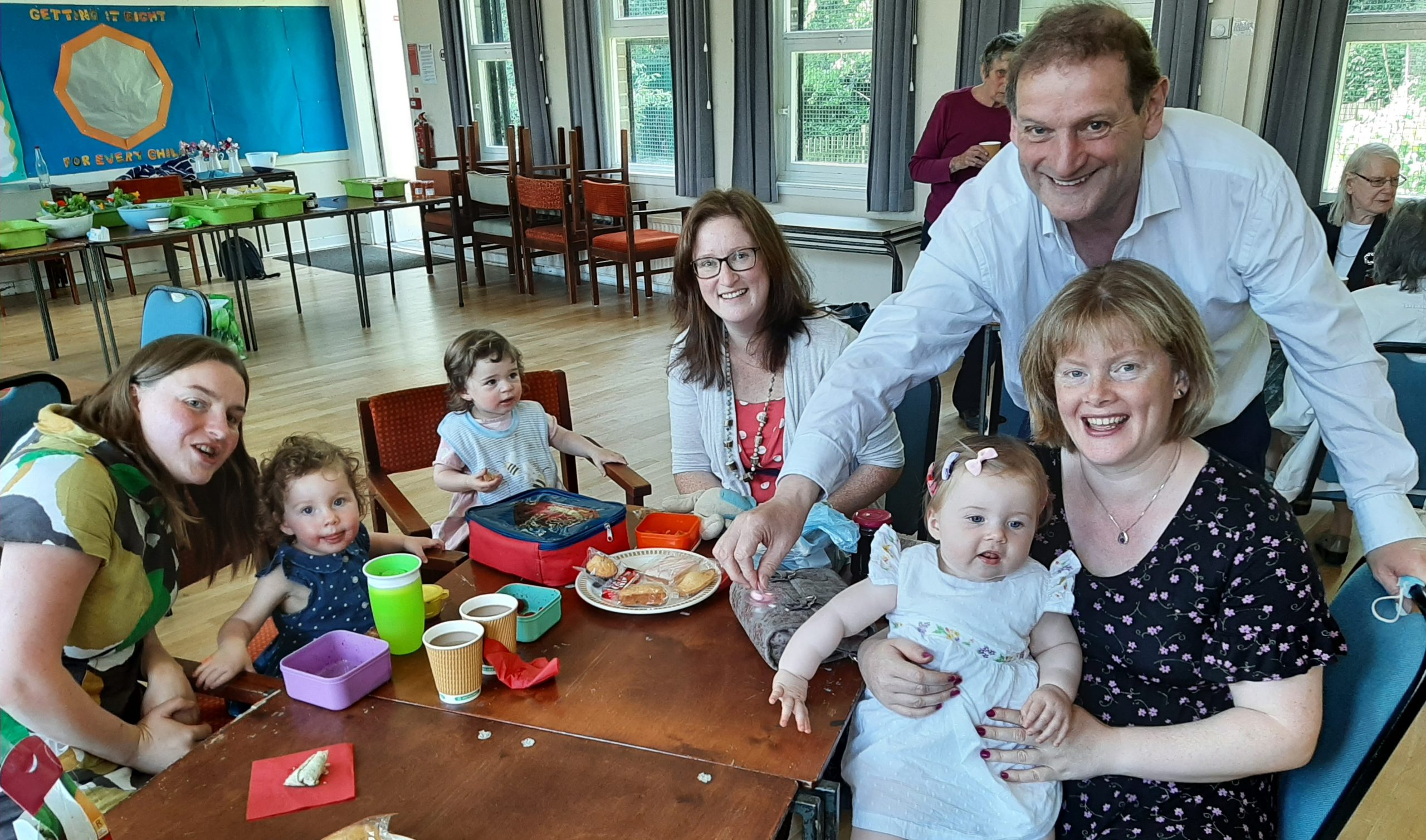 Meet the team! These are some of the people you might see around Holy Cross, but many others contribute to our community in different ways.

Stephen came to Holy Cross in February 2020, just before the first lockdown of the Covid-19 pandemic. He was previously Rector of Padstow in Cornwall and Associate Rector of St John’s, Princes Street, Edinburgh. He is married to Izzy and they have one daughter.

In addition to being Rector of Holy Cross, Father Stephen is Priest-in-Charge of St Salvador’s, Stenhouse and leads a clergy team serving both churches and their pastoral areas, which cover much of western Edinburgh from Saughton through Corstorphine to Silverknowes.

For 18 years Father Stephen was a Benedictine monk and he maintains a strong interest in Christian spirituality and worship. Educated at the Universities of St Andrews, Cambridge and Edinburgh, he teaches trainee priests at the Scottish Episcopal Institute and is passionate about making the riches of the Christian tradition accessible to all. He is also a historian and has published a number of books and articles, mainly on Christian worship and Scottish church history.

Stephen can be contacted at: rector.hce@gmail.com

Ross was ordained deacon in 2022 to serve at Holy Cross and St Salvador’s, Stenhouse. He trained for ministry at the Scottish Episcopal Institute while spending three years on placement at St Salvador’s.

Growing up in Lancaster, Ross moved to Edinburgh to study theology at New College. He has also studied at Union Theological Seminary in New York, where he worked for the Episcopal Diocese of New York, and at the University of Durham. Ross helps run the St Salvador’s Food Initiative and most of his ministry will be in Stenhouse. Ross is married to Hayley and they have a son and a dog.

Ross can be contacted at: curate.sshc@gmail.com

Br Joseph Emmanuel (Joe) is an Anglican Franciscan Friar and has been a member of the Society of St Francis for twelve years. He is Edinburgh ‘born and bred’ having been baptised in Carrick Knowe Parish Church and educated at Corstorphine Primary School and Craigmount High School. With the blessing of his Community he lives in Edinburgh as a ‘Brother on Detached Service’, serving mainly at St Salvador’s, Stenhouse but also at Holy Cross.

Before entering the Society of St Francis, he was a priest in London, having been formed for the Priesthood in the College of the Resurrection (Mirfield). Prior to this he studied at the University of St Andrews and has degrees in Medieval History and Medieval Islamic History. Within the Society of St Francis Br Joe is the Liturgical Secretary, a book reviewer for the Franciscan magazine and helps with the academic formation of Novices. Br Joe is hoping that his presence in the Diocese of Edinburgh and the Scottish Episcopal Church might encourage others to think whether they too might be called to some form of Religious Life.

Br Joe can be contacted at: josephemmanuelssf@franciscans.org.uk

Izzy was appointed as our Children’s Minister in 2021. She is the mum of a toddler, which is probably the most relevant part of her life experience to date: being at church in the role of the parent has been eye-opening! Izzy is currently starting up a new ministry for children and families at Holy Cross and is part of the Scottish Episcopal Church’s Children’s Chapel team, recording short services for children which are broadcast on YouTube and Facebook. Izzy has helped lead Children’s Ministry at St Petroc’s, Padstow and St John’s, Princes Street and has worked as a Teaching Assistant at Padstow Primary School. In York she worked as a voluntary classroom assistant in primary schools, helped out at a Cub Scout group, and was part of the creative team of a community theatre group which worked with children from disadvantaged backgrounds and adults with additional needs. Izzy originally trained as an art historian, and she sings and plays the viola, but is probably happiest doing bizarre and often completely unrecognisable craft projects with her toddler.

Izzy can be contacted at: families.hce@gmail.com.

Formed in the tradition of Anglican cathedral music at Edinburgh and Peterborough, Vaughan is a graduate of the Royal Scottish Academy of Music & Drama and was Director of Music at Cargilfield School in Edinburgh. He is principal clarinet of the Edinburgh Symphony Orchestra, a member of Doune Wind Quintet and soloist with other orchestral ensembles. Vaughan is also founder committee member of Scottish Schools Orchestra Trust, an organisation promoting orchestral playing for young people.

Educated at Fettes and St John’s College Cambridge, David is a classically trained concert pianist and violin and viola player. He has a wide range of musical experience including solo performance, accompanying and repetiteur work as a pianist, keyboard player for various bands and musical theatre, and is a chamber and orchestral violist. He is also a keen composer and is currently working on a musical. He works as a music teacher and freelance musician in Edinburgh and is very happy to be part of the musical life of Holy Cross.

Vestry is a committee which supports the Rector in the leadership of the church and has care of the property and finances of the congregation. Vestry is chaired by the Rector and its members are the trustees of the church as a charity. In addition to the Church Wardens, Secretary, Treasurer and Lay Representative (who represents Holy Cross on Diocesan Synod), there are also Ordinary Members who are elected at the Annual Meeting. The safeguarding coordinators and website contact report to Vestry but are not necessarily members.

There are many opportunities to serve, in addition to supporting our charity works and the St Salvador’s Foodbank.
Holy Cross can only operate and flourish with the help of many volunteers. Activities and roles include:

Are you interested in volunteering for any of these or other activities in the life of our church?
Please speak to the Rector or get in touch at web@holycrossedinburgh.org