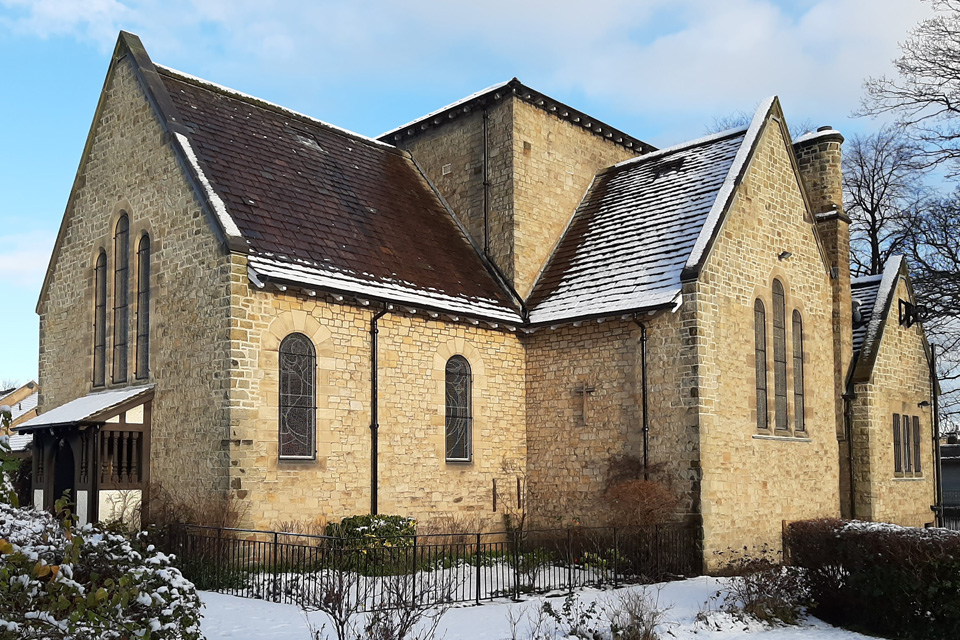 Holy Cross has a calm, prayerful atmosphere; even on cold winter days the building has a feeling of warmth and peace.

The Church of the Holy Cross

A church is a sermon in stone, a witness to faith in Jesus and a sacred space where we can meet God. While the Church is primarily the people of God, the building where they pray is much more than a convenient hall. Christian churches take their basic design from King Solomon’s Temple in Jerusalem, which was itself built according to a plan revealed by God to Moses (Exodus 25.9; Hebrews 8.5). To enter a Christian church is to enter none other than the House of God and the Gate of Heaven. Holy Cross was constructed within this tradition.

The building of Holy Cross began in November 1912. It was completed in 1913 and consecrated on 7 December 1913. It was designed by the Edinburgh architect JM Dick Peddie in the Romanesque style which was popular at the time, seen nearby for example at St Columba’s, Blackhall (1904) and St Anne’s Corstorphine (1912). The Buildings of Scotland: Edinburgh notes of this period that, ‘the quest for purity led back to the Romanesque, which had a special appeal for rationally-minded churchgoers in the still expanding suburbs’. Romanesque also spoke of the contemporary interest in Christian mysticism and the early Scottish Church.

Holy Cross was built of local Corstorphine stone in the style masons call ‘random rubble’ using rough cut stone of irregular shape, with the exception of the four pillars and their arches at the crossing which use ashlar (finely dressed and squared stone). The interior of the church is handsome bare stonework and speaks of an austere spirituality; some have described the building as ‘monastic’. It was originally designed to have a longer nave, a chapel on the north side and a bell tower over the crossing, but after the First World War there were no funds to finish the building as planned. Appropriately for its dedication, it is in the form of a Greek Cross with chancel and adjoining vestry, nave and two transepts. With its icons and shape, Holy Cross also recalls the churches of the Christian East and the architectural historian Charles McKean describes it in his Edinburgh: An Illustrated Architectural Guide as having ‘a whiff of Armenia’.

Originally, the altar was against the east wall and the choir sat in the crossing but in 1982 the church was reordered with the altar being moved to the crossing and the choir stalls sited in the sanctuary. Later an aumbry for the reservation of the Blessed Sacrament was inserted in the centre of the east wall. The real and living presence of Jesus Christ in the Eucharist is thus at the centre of the church and at the heart of our community. The church has always had chairs not pews.

Three beautiful stained glass windows add to the warmth and colour of the church.

The east window was dedicated on 12 October 1930. It was created by the renowned English stained glass designer Christopher R Webb, a pupil of Sir Ninian Comper. It carries Webb’s signature in the bottom right corner, a tiny image of St Christopher.  The window depicts the Birth of Jesus, with Mary and Joseph in the stable, angels above and Shepherds and the Wise Men on either side.

At the base of the window are three roundels depicting:

On the south wall of the nave are two contemporary stained glass windows installed in 1990 by the Scottish designer and window maker Patrick Ross-Smith. They include lines from the hymns ‘How great thou art’ and ‘O Jesus, I have promised’. When the sunlight shines through these windows on bright mornings, people sitting in the nave are often bathed in blues and yellows picked out from the coloured glass.

The furnishings include a sanctuary lamp and other items from the Catholic Apostolic Church in Mansfield Place which closed in the 1950s and is now the Mansfield Traquair Centre. In the transepts are two large paintings of the Entombment of Christ and the risen Christ meeting Mary Magdalene by the Edinburgh artist William Hole. They came from the chapel of the Douglas-Home family at The Hirsel in Berwickshire.

The icons of Our Lord and Our Lady, and a smaller icon of St Patrick and St Columba, come from the icon workshop of the Orthodox Parish of the Dormition at Kondopoga in northern Russia which had a close link with Holy Cross. There is also a set of kneelers embroidered by members of the congregation with scenes from our east window, images of the Cross and animals from Noah’s Ark.

Holy Cross Church is just over 100 years old but it carries the atmosphere of centuries of sanctity, it is a place ‘where prayer has been valid’ (TS Eliot, Little Gidding). These words of Ninian Comper may be applied to Holy Cross: What is a church? It is a building which enshrines the altar of God who dwells not in temples made with hands and who yet has made there his covenanted presence on earth. It is the centre of worship of a human community who recognise Christ as the Pantokrator, the Almighty, the Ruler and Creator of all things. At its altar is pleaded the sacrifice of Christ in complete union with the Church Triumphant in heaven, of which he is the one and only Head, the high priest forever after the order of Melchisedek… The purpose of a church is to move us to worship, to bring a person to their knees, to refresh their soul in a weary land.

The church has wheelchair access via a movable ramp at the west door and a loop system for people with hearing loss.