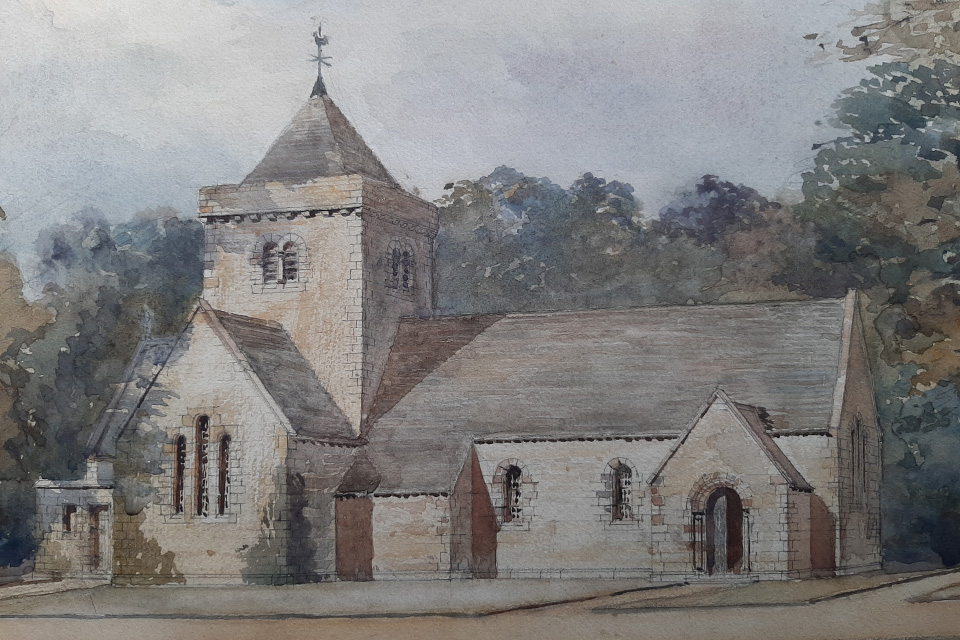 Holy Cross Scottish Episcopal Church was founded in 1896 but its roots go back to Roman times. Our history has formed who we are today as a Christian community and inspires our commitment to Christian mission in the future.

The History of Holy Cross

Although the present congregation at Holy Cross began as a mission from St Mary’s Cathedral at the end of the 19th century, the Christian faith first came to this part of Edinburgh with the Romans. They had a fort at Cramond, where the first church was built after they left. This church was later dedicated to St Columba, possibly because it was a staging post for monks journeying between Iona and its daughter house at Lindisfarne. It belonged to the diocese of Dunkeld while most of Lothian was in the diocese of St Andrews. Links with Iona, Edinburgh and Lindisfarne are part of our history and are reflected in the east window at Holy Cross. We share the same faith with these early Christians.

As the Scottish Episcopal Church is a direct descendant of the medieval Church in Scotland, Holy Cross is thus a descendant of the early Christian community at Cramond. It serves an area roughly the same as the medieval Cramond parish which included what is now Davidson’s Mains, formerly known by the less romantic name of Muttonhole. The last Episcopalian Minister of Cramond, the Revd John Somerville, was deprived in 1689 for his loyalty to the Stuarts, and the Scottish Episcopal Church then entered a period of persecution and decline from which it emerged in the 19th century. The parish did give one Archbishop of Canterbury to the Church of England, Randall Davidson (1848–1930) who was from the family who lived at Muirhouse and gave the village its name.

Holy Cross began as what is today called a ‘church plant’ – it was part of a movement to plant churches in the new suburbs of Edinburgh that were developing in the late 19th century. Davidson’s Mains was growing thanks to the opening of Barntongate Station in 1894 and the first steps were taken in 1896 when the Revd Alfred Griffiths, Precentor at St Mary’s Cathedral, began holding Episcopalian services in the old Cramond Church hall, then located in Davidson’s Mains next to the railway embankment.

The congregation grew and in 1899 was joined by the boys of Cargilfield School which had moved to Cramond. In the same year Bishop John Dowden made Holy Cross a Mission Church of the Diocese of Edinburgh with James Niven, a chaplain at the cathedral, as the first priest in charge. He was followed in 1901 by Alfred Griffiths. The congregation needed a church of its own and leased land from the Barnton Estate where it constructed a temporary iron church on the present site, marked on the map above. Under the leadership of Mr Griffiths the congregation also built a ‘Church Room’ in 1906 to foster connections with the local community and for mission work ‘among people who might not first want to enter a church’.

In 1909 the original lease ran out, the property was purchased from the estate and plans were made to build a stone church which was dedicated on 7 December 1913 and is described on the Our Church Building page. This was phase one of the plan. Phase two, as portrayed in the architect’s watercolour, would have extended the nave, added a chapel and heightened the tower but was abandoned because of the First World War and post-war economic conditions. The strain of the building works provoked severe mental health problems for Alfred Griffiths who spent a long time in the Royal Edinburgh Hospital and had to resign from Holy Cross. He was remembered as a very kind and devout priest and his portrait is found among the figures in the murals painted on the walls of the Cathedral Song School by Phoebe Traquair in 1888–1892. There is also an affectionate cartoon of him drawn by an early member of the congregation, Francis Stuart Silver.

Under subsequent priests Holy Cross grew and flourished and it became an incumbency (a fully independent congregation) with a rector in 1933. Further growth came in the 1950s when economic development led to new families coming to the area. Looking at the history of Holy Cross, various characteristics stand out. From the first it was an outward-looking congregation with a ministry to families and children. At the start it established clubs for local mothers and children, later came a Sunday school, youth fellowship and two playgroups, one of which still flourishes in our hall. It has also played its part in the life of the village, hosting the Christmas Market and some of the Christmas Lights and with the Rector leading the Remembrance Day Service alternately with other local ministers.

Holy Cross has always had connections across the globe, in addition to supporting international charities. As well as Scotland and England, previous Rectors have come from Ireland, South Africa, the USA and Canada. One rector had spent time in Ghana and a member of the congregation spent over 20 years as a missionary in Jordan. More recently Holy Cross supported an Orthodox parish in Russia, and deep links with the Church in India continue. We support the Christian Medical College in Vellore, a member of the congregation regularly works in the diocese of Tirunelveli, and an Indian (Knanaya) congregation of the Syrian Orthodox Church shares our church.

As part of this outward focus, Holy Cross has had mutually beneficial links with some of the smaller and poorer churches in our diocese. The original ‘tin tabernacle’ iron church was given to the Episcopalian congregation in Prestonpans where Canon Griffiths had begun mission work after leaving Holy Cross. In the 1930s, a youth Fellowship was established at Holy Cross with the help of Father John Shand of St Salvador’s, Stenhouse. After the foundation of St David’s in 1941 in the nearby housing scheme at Pilton, links developed between the two congregations including a regular Palm Sunday procession between their two churches. This tradition continues as a link is being established between Holy Cross and St Salvador’s, Stenhouse by which the two churches share a rector and curate.

Women, who had been members of the Vestry (church management committee) since the 1930s, have always had a prominent place in our congregation and it was a pioneer in supporting women’s ministry. Mary Harrison of Holy Cross became the first female Lay Reader in the diocese and was among the first women ordained as deacons in 1986, and in 1989 Alison Fuller became our first woman curate and was among the first women ordained priest in 1994.

Holy Cross has the feel of a church that is prayed in and members of the congregation have led remarkable lives of contemplation. The writer knows this from experience, but it is hard to quantify prayer. One sign is that Holy Cross has been involved in the Anglican revival of the religious and monastic life in the 20th century. John Hewett, Rector 1944–1958, came to Holy Cross after eight years as chaplain to the sisters of the Community of St Peter at Joppa where they ran a home for women and girls. More recently members of Holy Cross have been Franciscan Tertiaries and there were close links with the brothers of the Society of St Francis when they were in Edinburgh. Members of the congregation have also supported Mother Mary Agnes and the hermit-nuns of the Society of Our Lady of the Isles in their foundation on Shetland. One curate left to become chaplain to the Sisters of the Love of God at Bede House, Staplehurst and another to explore her vocation with the All Saints Sisters of the Poor in Oxford. Connections to the religious life continue at Holy Cross as does the deep commitment to prayer.

Holy Cross began with Evensong in a hall and the liturgy has always been central to its life. Canon Griffiths brought the riches of the Anglican choral tradition together with the catholic tradition of the Oxford Movement. Matins (Morning Prayer) remained the main Sunday service until the 1980s but the Eucharist was celebrated regularly, vestments were worn, and Christmas Midnight Mass was introduced during World War II. Holy Cross follows a distinctive series of colours during the Christian year, with blue in Advent and plain sackcloth with oxblood edging (‘lenten array’) in Lent instead of the usual purple. This is called the ‘Sarum’ tradition, after the customs of Salisbury which were used in medieval Scotland, and it aims to recover our own local traditions rather than just follow modern Roman Catholic custom. In 1983 Holy Cross adopted the 1982 Scottish Liturgy and the church was reordered with the altar in the centre under the crossing. Canon Douglas Kornahrens (1983–2019) had a strong interest in the Scottish Episcopalian liturgical tradition and for a time the congregation occasionally used the 1744 Liturgy of Jerusalem. In recent years Holy Cross has returned to the 1982 Liturgy but is rediscovering the riches of the older texts of the Scottish and Anglican tradition and experimenting with new forms of worship.

After two long incumbencies, Holy Cross is now at a turning point. Many of the successful initiatives of the late 20th century have ended or are being transformed, new members are arriving and new projects are being started. We look to the future with hope and pray that our community will evolve, true to its founding values outlined above, so that it may develop into an even more powerful witness in north west Edinburgh to the Mystery of Christ and his love for all.

Priests and Rectors of Holy Cross