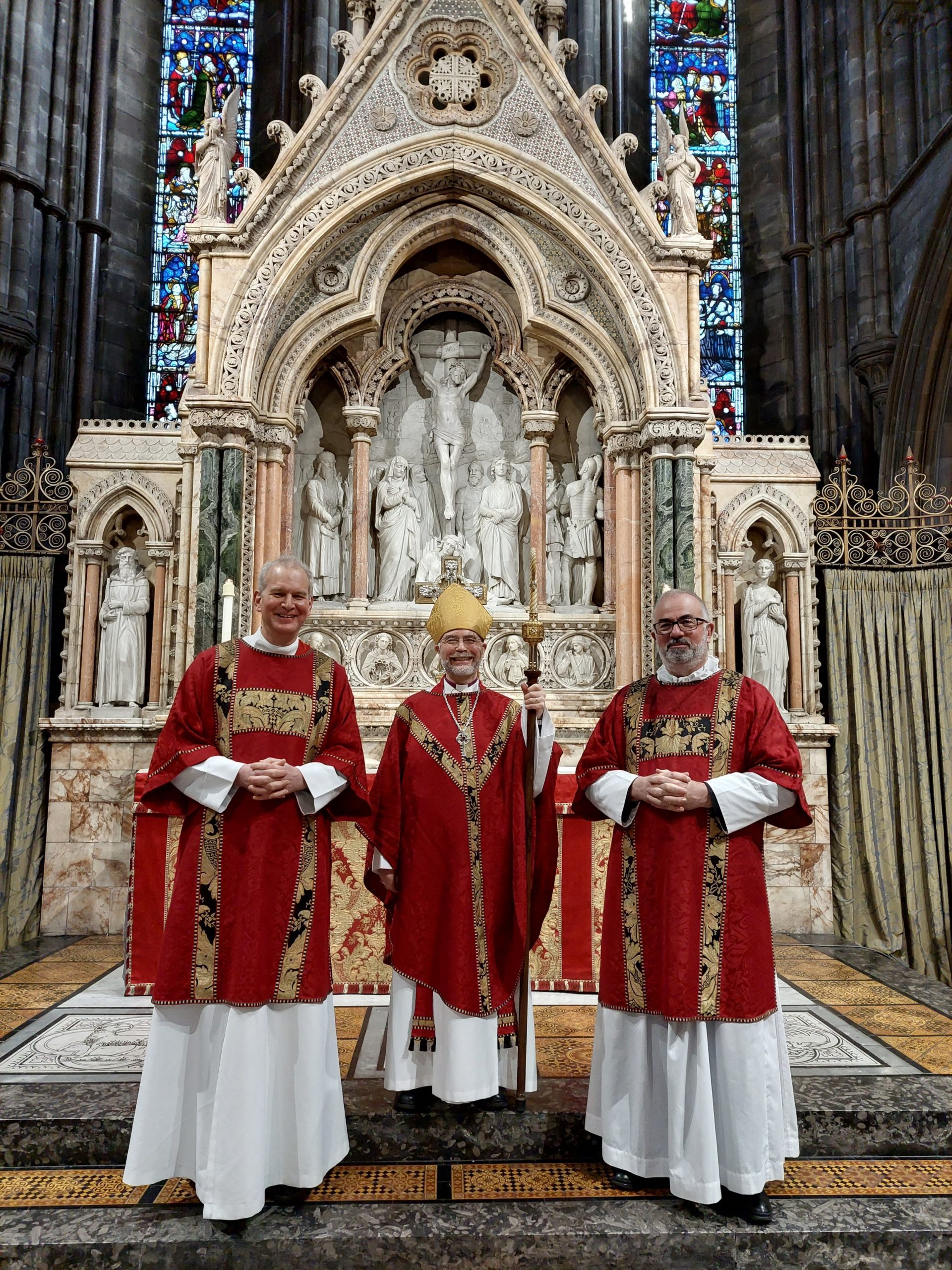 Christianity does not exist as an idea; it is handed on in a community, the Church.

‘Are you Catholic or Protestant?’ This question is sometimes heard in Scotland and a well-informed Episcopalian might answer, ‘Catholic but not Roman Catholic’ or, perhaps, ‘Both’. Holy Cross is a congregation of the Scottish Episcopal Church (SEC) which is a branch of the Catholic Church and the direct successor of the first Christian communities in Scotland.

The Catholic Church was founded by Jesus Christ on the foundation of his twelve Apostles. The Apostles established bishops to oversee the Christian communities they founded and these consecrated new bishops to succeed them in leading their Churches. The word ‘episcopal’ means ‘led by Bishops’ because the Greek word for ‘bishop’ is episcopos. Gradually, the faith spread all over the world and put down roots in different cultures. In Scotland, Christianity came with the Romans and a local Church developed with strong ties to Ireland, England and Rome.

As a part or branch of this Catholic Church, the SEC is in direct descent from these early Christian communities in Scotland led by saints such as Columba, Ninian and Mungo, and its Bishops are successors of these saints (as well as of the rogues who occasionally become bishops!). Looking around Scotland today, the three main sister Churches which share this descent and have a presence all over the nation are the Scottish Episcopal Church, the Roman Catholic Church and the (Presbyterian) Church of Scotland.

The one Catholic Church in Scotland split at the Protestant Reformation in 1559–60 when many remained loyal to the Bishop of Rome and became the Roman Catholic Church. The remainder of the Church was torn by violent rivalries and eventually split in 1690 into the Presbyterian Church of Scotland, led by committees, and the Scottish Episcopal Church or Episcopal Church of Scotland, led by bishops. The immediate cause of the split was the loyalty of Episcopalians to the deposed King James VII. This loyalty, called ‘Jacobitism’ from the Latin for James (Jacobus), cost the Episcopal Church dear as its members supported armed Jacobite risings to restore the true king. The fateful battle of Culloden in 1746 ended hopes of a restoration and the SEC made its peace with the new royal family in 1788. Up until then the Church was persecuted and, from being supported by the majority of Scots in 1690, it was reduced over a century to what Sir Walter Scott described as a ‘shadow of a shade’.

The SEC, however, grew again in the 19th and 20th centuries and founded many new churches all over Scotland, including Holy Cross, Davidson’s Mains. Schools, convents and orphanages were founded and Episcopalians, especially our religious sisters, were active in serving the poor of Scotland’s industrial cities and other neglected groups such as the herring lassies. This concern for people on the margins of society has always been a characteristic of the SEC.

Today, led by bishops and synods (assemblies of clergy and laity), the worship of the SEC is centred on the Eucharist but encompasses a variety of forms, always valuing beauty and music as reflections of God’s glory. The SEC is involved in social action all over Scotland and is committed to the care of creation. Its faith is rooted in the Scriptures and the ancient Catholic Creeds and Councils and it is also open to development, with all orders of ministry open to both women and men and Christian marriage extended to divorced people and same-sex couples.

More information about the SEC can be found on the Scottish Episcopal Church website.